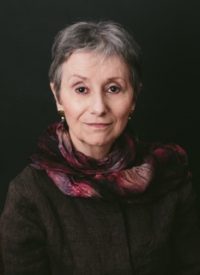 Alison Anderson spent many years in California; she now lives in a Swiss village and works as a literary translator. Her translations include Europa Editions’ The Elegance of the Hedgehog by Muriel Barbery, and works by Nobel laureate J. M. G. Le Clézio. She has also written two previous novels and is the recipient of a National Endowment for the Arts Literary Translation Fellowship. She has lived in Greece and Croatia, and speaks several European languages, including Russian.

The Summer Guest
Inspired by the life of legendary Russian writer Anton Chekhov, The Summer Guest is a rich, riveting novel that spans centuries and continents as it interweaves three women’s lives around the mystery of a long-lost Chekhov manuscript.
Zinaida Lintvaryova, a doctor from a wealthy Ukrainian family, knows there is no cure for the disease that is ravaging her sight, and by early 1888, almost completely blind, she has forsaken her city life for a quieter one on her family’s country estate. Using a ruler to guide her pen, she starts a diary as a way of filling the long, hot days. Then the Chekhov family arrives to spend the first of two summers a dacha on the estate, and Zinaida’s diary becomes an intimate account of the singular relationship that blossoms between her and middle son Anton Pavlovich, a writer on the cusp of greatness.
Over 125 years later, the publication of Zinaida’s diary could be what saves the small, floundering publishing house that Katya Kendall runs with her husband in London. Hired by Katya to translate the diary, Ana Harding is soon absorbed by the poignant, poetic narrative of an extraordinary friendship, but Zinaida’s occasional references to a novel that Chekhov was secretly writing intrigue her―as do Katya’s evasive responses to her questions. What if this manuscript survived? Unearthing it would be the literary find of the century, and Ana is determined to track it down. She travels to the Ukraine, but finds a very different country to the one in which Zinaida lived―the golden age she captures in her diary is now a distant memory, obscured by the rumblings of conflict. But as the diary’s trail twists and turns, she discovers that the manuscript is not the only mystery contained within its pages.