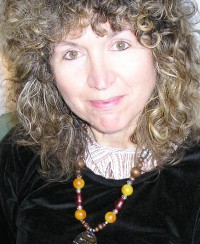 Caroline Lawrence is American. She lives with her husband in London and is an active speaker at schools and festivals. In 2001 she published The Thieves of Ostia, which started a series of The Roman Mysteries,  a hugely popular historical novels for children. The series is about a Roman girl called Flavia and her three friends: Nubia (a freed slave girl), Jonathan (a shunned Jewish boy) and Lupus (a beggar boy without a tongue). The series has won numerous awards, has been published in many different languages worldwide and became a BBC TV series. It has also won Caroline the 2009 Classics Association Prize for ‘a significant contribution to the public understanding of Classics’. Her latest series of books is called The Western Mysteries, set in Virginia City Nevada Territory in the early 1860s.

The Case of the Bogus Detective is the fourth and final whip-cracking, death-defying adventure in The P.K. Pinkerton Mysteries, from the bestselling author of The Roman Mysteries, Caroline Lawrence. P.K’s life turns upside down when her father, Robert Pinkerton, suddenly appears in Virginia City. Suddenly she has to learn how to be a ‘girly-girl’ in a cunning plot to outwit silver thieves, but it seems the thieves are one step ahead! Has P. K. finally met her match or will her detective skills be able to turn the situation around and impress her private-eye pa?