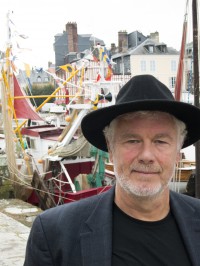 Edward Girardet is a journalist, writer and producer who has reported widely from humanitarian and conflict zones in Africa, Asia and elsewhere since the late 1970s. As a foreign correspondent for The Christian Science Monitor, US News and World Report, and The MacNeil/Lehrer NewsHour based in Paris, he first began covering Afghanistan several months prior to the Soviet invasion in 1979. He has worked on numerous television current affairs and documentary segments on subjects ranging from the war in Angola to lost tribes in Western New Guinea and environmental issues in Africa for major European and North American broadcasters. Girardet is a founding director of the Institute for Media and Global Governance in Geneva, Switzerland. He is also editor of Crosslines Essential Media Ltd (UK).

Girardet has written widely for major publications such as National Geographic Magazine, The Christian Science Monitor, International Herald Tribune, Financial Times and other media on humanitarian, media and conflict issues. In addition to Killing the Cranes, he has also written and edited several books, notably Afghanistan - The Soviet War (1985), Somalia, Rwanda and Beyond (1996),Populations in Danger (1996), and The CROSSLINES Essential Field Guide to Afghanistan (1998, 2004 and 2006). Girardet lives with his family in Cessy, France near the Swiss border with Geneva.

Killing the Cranes, A Reporter's Journey Through Three Decades of War in Afghanistan: Leading international journalist Edward Girardet has been a witness to more than three decades of upheaval in Afghanistan. In Killing the Cranes, he recollects the events he has seen unfold in Afghanistan, beginning with the Red Army occupation in 1979, the collapse of the communist regime, the bitter Battle for Kabul in the mid-1990s, the Taliban takeover, and the post-9/11 US invasion. In the paperback edition, Girardet has updated the book throughout and has written a new epilogue to reflect ever-changing events on the ground.