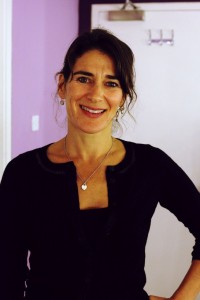 Esther Freud trained as an actress before writing her first novel, Hideous Kinky, which was shortlisted for the John Llewellyn Rhys Prize and made into a feature film starring Kate Winslet. Her novels include Peerless Flats, Summer at Gaglow, The Wild, The Sea House, Love Falls and Lucky Break. Esther Freud was named a Granta Best of Young British Novelist in 1993. She lives in north London and Suffolk.

Mr Mac and Me
Mr Mac and Me is Esther Freud’s eighth novel.  In it she steps into the past, into 1914.  As her subject she takes the year the great Scottish architect and designer Charles Rennie Mackintosh and his artist wife Margaret MacDonald spent in the Suffolk village of Walberswick, a year that ended in disaster when he was taken as a German spy and imprisoned.  The story is told through the eyes of a young boy, Thomas, whose six brothers lie in the village graveyard and whose father is a local publican. Beginning with the arrival of the mysterious Scot and ending with his abrupt departure in 1915, a story unfolds that tells us of art and artists, of a young boy’s dreams, of wartime life in a coastal village.  Inspired by her own experiences of Suffolk, Esther Freud has written a sea story, a ghost story, an extraordinary work of art, with a lightness and clarity that only the best art can achieve.