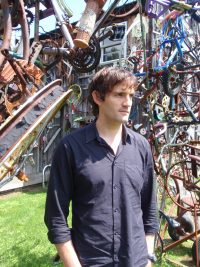 Jason Donald was born in Scotland and grew up in South Africa. He studied English Literature and Philosophy at St Andrews University and, in 2005, graduated from Glasgow University’s Creative Writing Masters Degree programme with distinction. His first novel, Choke Chain, was published by Cape in 2009. Dalila is his second novel. Film rights to Dalila have been acquired by the director and screen writer Christopher Hampton.

Dalila is a remarkably moving fictional story of one woman’s heart-breaking journey through the UK asylum system.

Irene Dalila Mwathi comes from Kenya with a brutally violent personal history. Once she wanted to be a journalist, now all she wants is to be safe. When she finally arrives, bewildered, in London, she is attacked by the very people paid to protect her, and she has no choice but to step out on her own into this strange new world. Through a dizzying array of interviews, lawyer’s meetings, regulations and detention centres, she realises that what she faces may be no less dangerous than the violence she has fled.

Written with grace, humour and compassion, this timely and thought-provoking novel tackles its uncomfortable subject matter in a deeply affecting way.

‘Dalila is one of the best pieces of fiction I've read in a while. Succinct yet beautifully descriptive, it would be impossible for any reader to come away from it without a renewed or newfound sympathy for genuine asylum seekers. This is a compelling, heartbreaking novel.’
Noo Saro-Wiwa