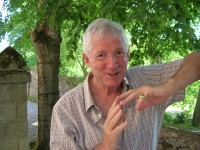 Kevin Crossley-Holland is a well-known poet and prize-winning author for children. The Seeing Stone won the Guardian Children’s Fiction Award, the Smarties Prize Bronze Medal, and the Tir na n-Og Award. The Arthurian Trilogy has won worldwide critical acclaim and has been translated into twenty-five languages. Crossley-Holland has translated Beowulf from the Anglo-Saxon, and his retellings of traditional tale include The Penguin Book of Norse Myths and British Folk Tales. He also writes operas and plays. His latest book for children, Heartsong, will be published this September.
He has often lectured abroad on behalf of the British Council, regularly leads sessions for teachers and librarians, and visits primary and secondary schools. He offers poetry and prose workshops and talks on the Anglo-Saxons and Vikings, King Arthur, heroines and heroes, and myth, legend and folk-tale.
He now lives on the north Norfolk coast in East Anglia.