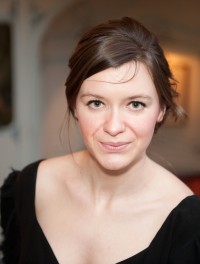 ?Naomi Wood is? a writer based in London? in? England. ?She? grew up in Yorkshire, ?then lived in Hong Kong? ?until ?she? moved back to the UK to study English Literature at the University of Cambridge.? After a short stint working for Random House, ?she? studied for the Masters in Creative Writing at UEA, where ?she? wrote ?her? first novel, The Godless Boys.

?Mrs Hemingway is Naomi Wood’s second novel, and her research has taken her on field trips to Chicago, Boston, Key West, Cuba, Antibes and Paris. She spent five months as a fully-funded ? resident scholar at the Library of Congress in Washington DC to research the novel. ? ?Naomi Wood is a Young Patrons Ambassador at the British Library and teaches Creative Writing at Goldsmiths University.