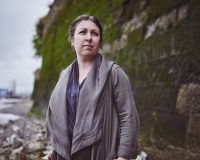 Ruth Ware grew up in Lewes, in Sussex and studied at Manchester University, before settling in North London. She has worked as a waitress, a bookseller, a teacher of English as a foreign language and a press officer.

​The Lying Game is her most recent novel.

The text message is just three words: I need you.

Isa drops everything, takes her baby daughter and heads straight to Salten. She spent the most significant days of her life at boarding school on the marshes there, days which still cast their shadow over her now.

Something terrible has been found on the beach. Something which will force Isa to confront her past, together with the three best friends she hasn't seen for years, but has never forgotten. Theirs is no cosy reunion: Salten isn't a safe place for them, after what they did.

At school the girls used to play the Lying Game. They competed to convince people of the most outrageous stories. But for some, did the boundary between fact and fantasy become too blurred?

And how much can you really trust your friends?