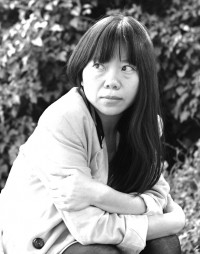 Xiaolu Guo was born in south China. She studied film at the Beijing Film Academy and published six books in China before she moved to London in 2002. The English translation of Village of Stone was shortlisted for the Independent Foreign Fiction Prize and nominated for the International IMPAC Dublin Literary Award. Her first novel written in English, A Concise Chinese-English Dictionary for Lovers was shortlisted for the Orange Prize for Fiction, and 20 Fragments of a Ravenous Youth,published in 2008, was longlisted for the Man Asian Literary Prize. Xiaolu's film career continues to flourish; her feature, She, A Chinese, was released in 2009 and her documentary Once Upon a Time Proletarian has been screened at international film festivals such as Venice and Toronto Film Festivals. I Am China is her most recent novel. In 2013 she was named as one of Granta's Best of Young British Novelists.

In a flat above a noisy north London market, translator Iona Kirkpatrick starts work on a Chinese letter: Dearest Mu, The sun is piercing, old bastard sky. I am feeling empty and bare. Nothing is in my soul, apart from the image of you. I am writing to you from a place I cannot tell you about yet...

In a detention centre in Dover exiled Chinese musician Jian is awaiting an unknown fate. In Beijing his girlfriend Mu sends desperate letters to London to track him down, her last memory of them together a roaring rock concert and Jian the king on stage. Until the state police stormed in. As Iona unravels the story of these Chinese lovers from their first flirtations at Beijing University to Jian’s march in the Jasmine Revolution, Jian and Mu seem to be travelling further and further away from each other while Iona feels more and more alive. Intoxicated by their romance, Iona sets out to bring them back together, but time seems to be running out.